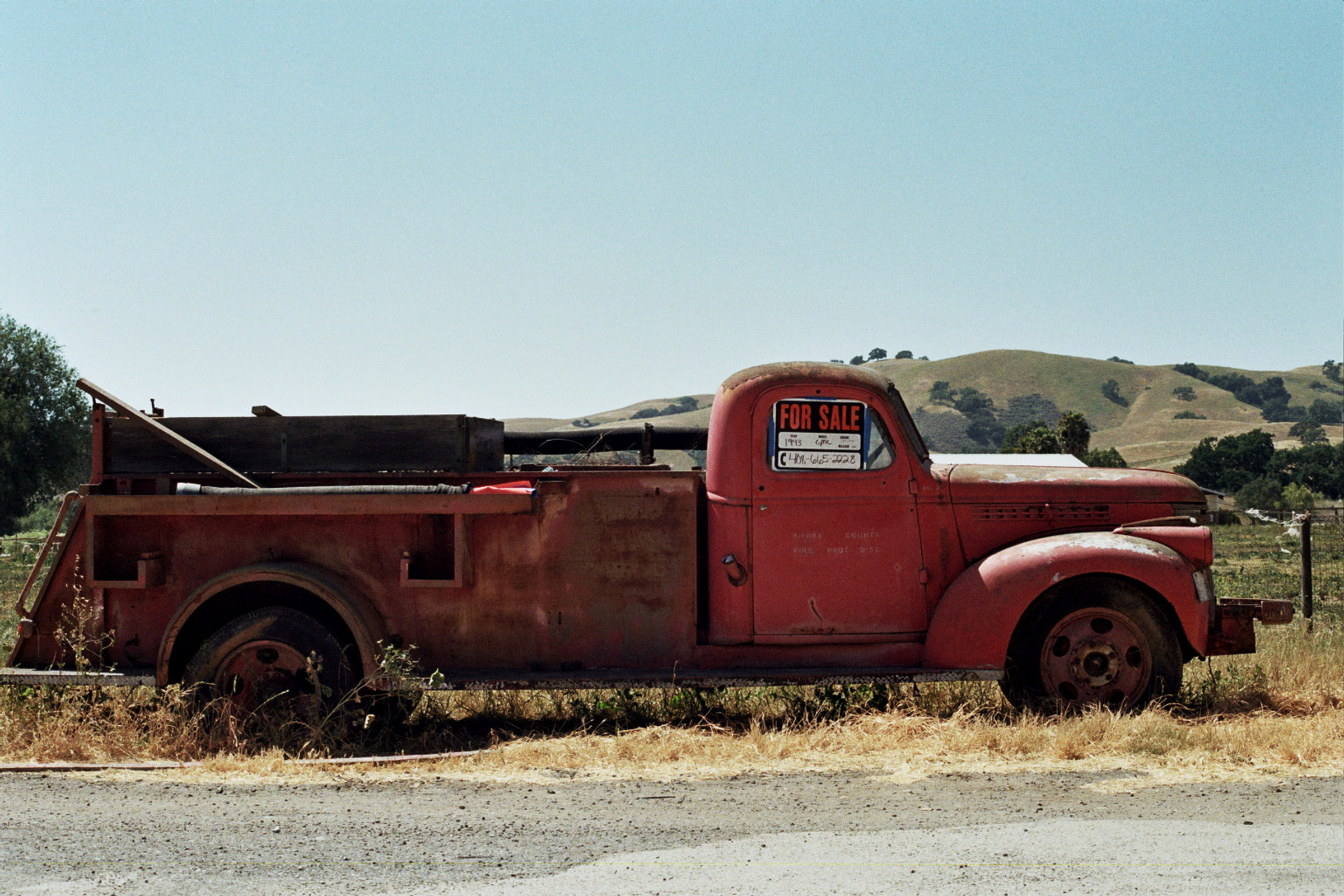 When I started google was telling me I’ll arrive arround 7pm so I called my colleague told him I’ll be in @Fremont arround 7pm. I did not think about the need to stop from time to time or have a breek to smoke a cigarett, grab some water, fuel the car… And I did not know that California had so many faces. Here’s one of them. 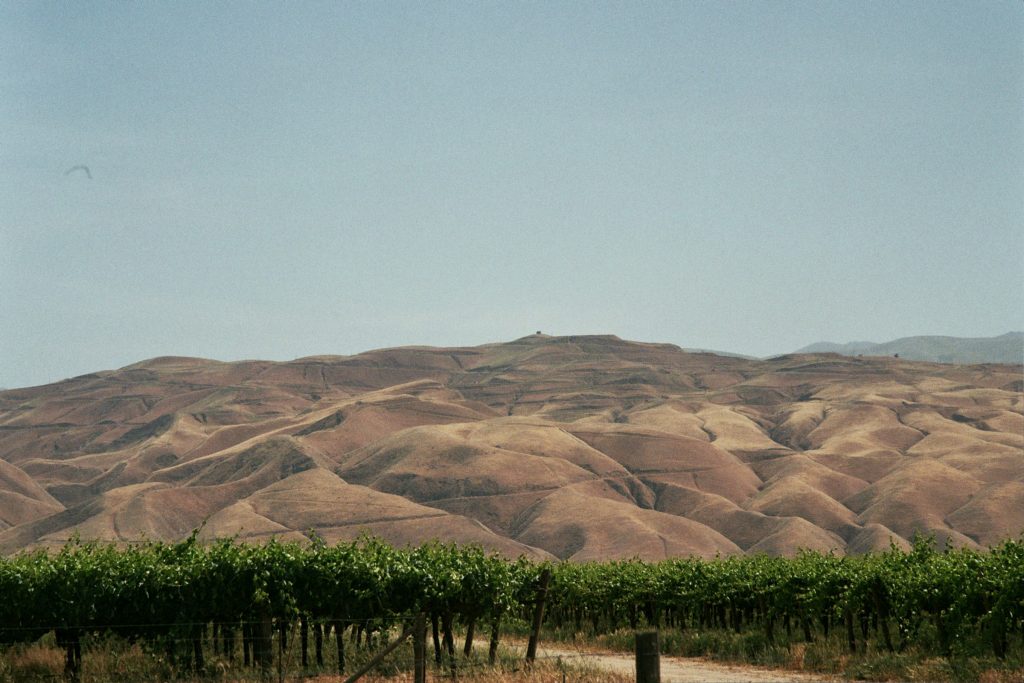 When I arrived it was almost 9 pm. I had to stop more often than expected, after arround 2 hours the service light of „my“ Toyota Yaris iA was lighting up in orange, and I did not have any idea what the car tried to say me so I looked it up in the manual. „Ready for Service“…

From @Fremont we drove down the smaller streets with a GMC Yukon, total different comfort. After some time we arrived in what we thought would be @SantaCruz which was not Santa Cruz at all it was @Capitola, but close enought. 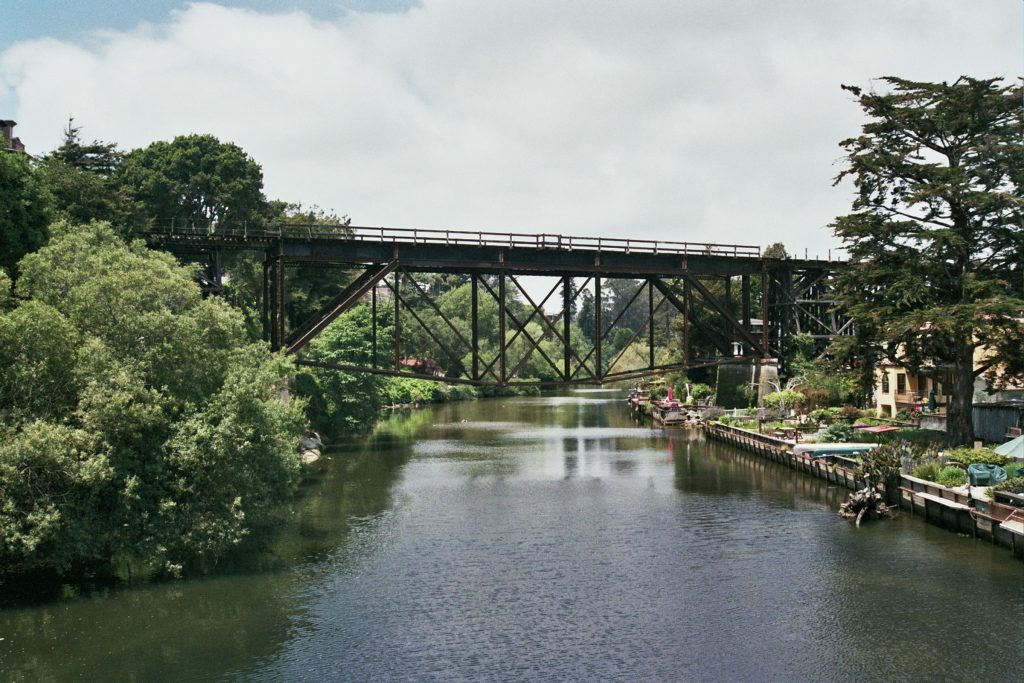 It looked really similar, there’s a river that comes to the ocean, there’s an old train bridge that’s not used anymore, there’s some beach people are at. And it’s colorful like Santa Cruz. It took us a while until we found out it’s not Santa Cruz… 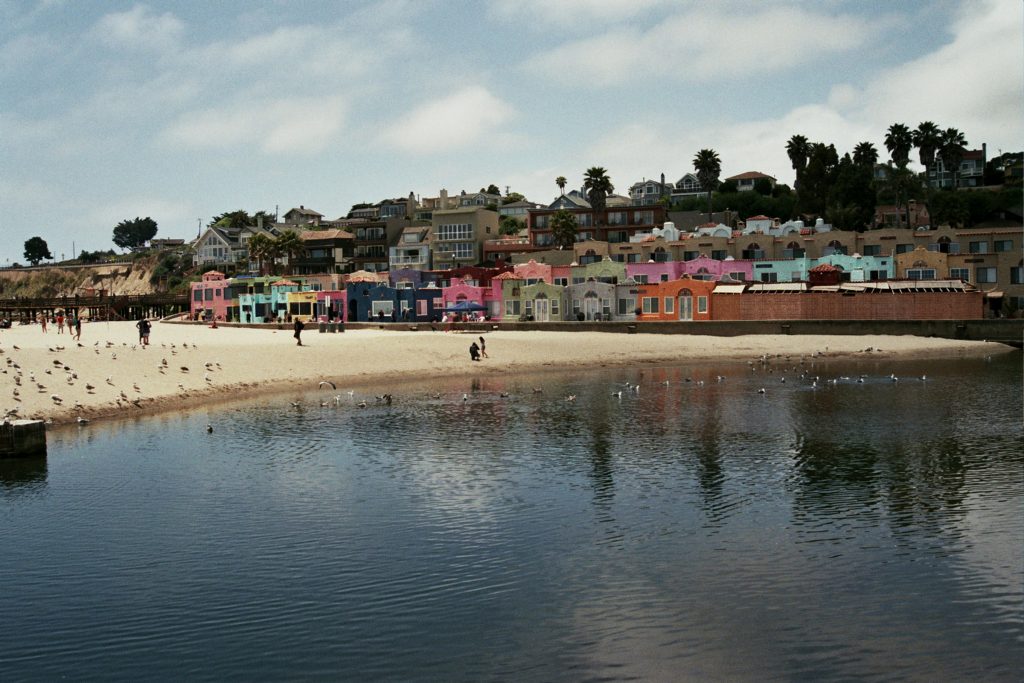 #capitolaisnotsantacruzThere are the same birds as in Santa Cruz, okay arround the ocean there’re everywher galls. 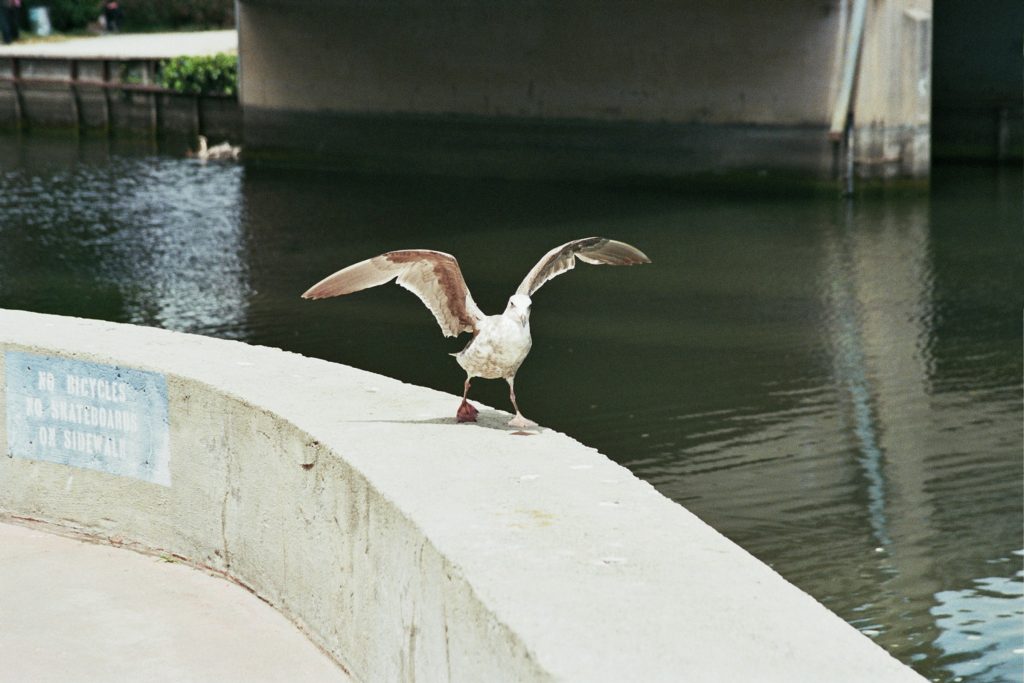 Actually there are the same birds as all arround the world are. Those birds are like in every city, whenever it comes to people, settlements, there’re doves. 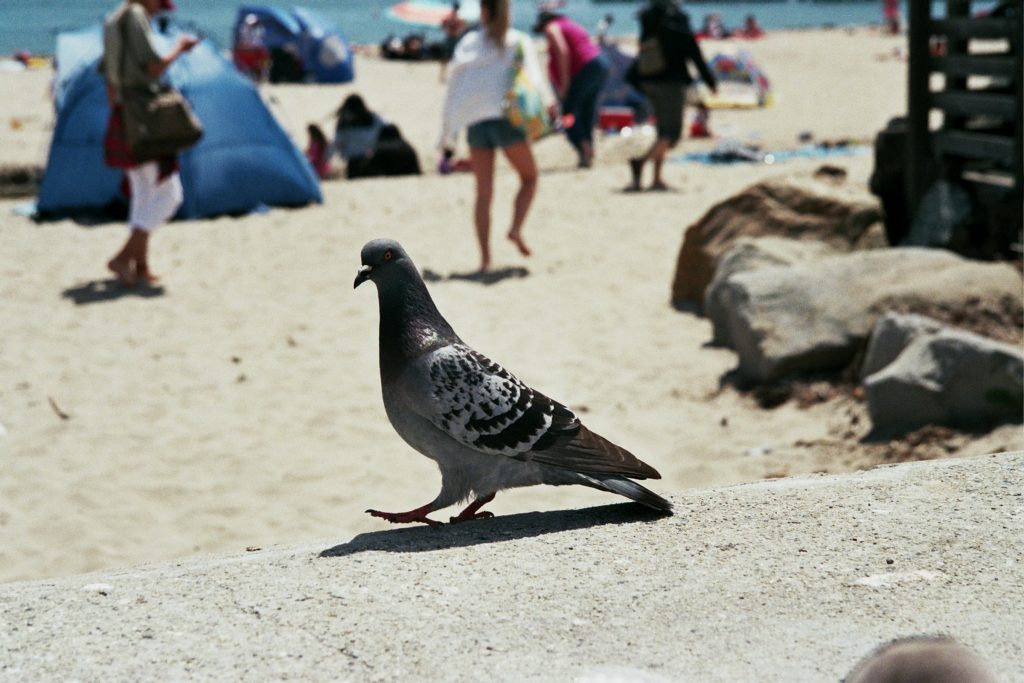 And of courese weren’t we able to tell the difference based on the ocean, as it’s the same great big ocean everywhere arround here. 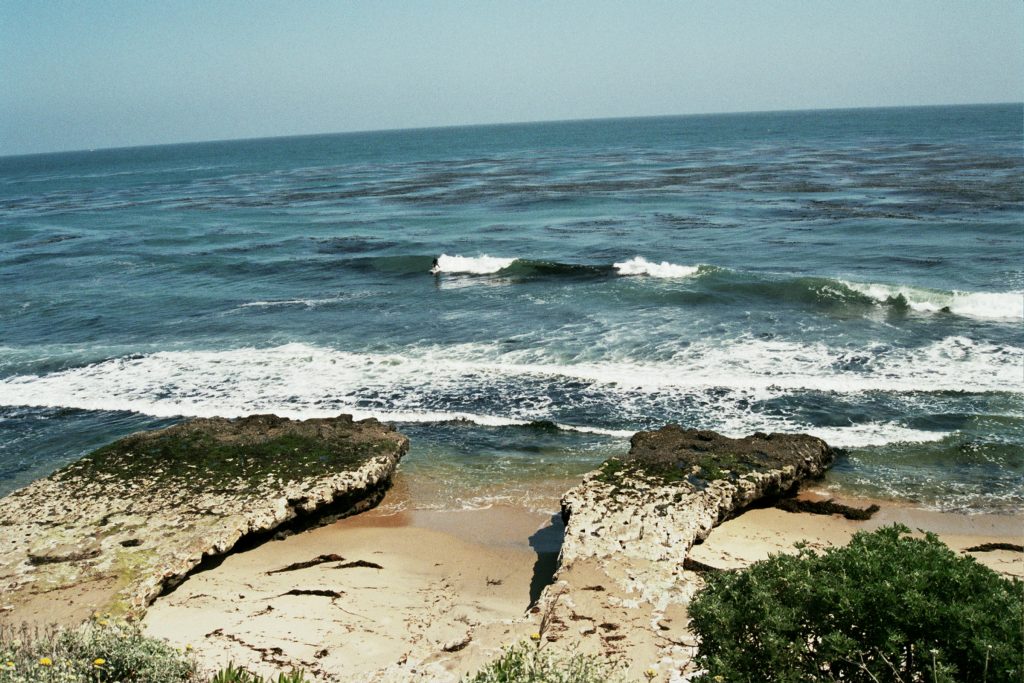 Anyway we staied there for a while, took a walk, some staranger passed us on his parking ticket with 3 or 4 hours left, so first stop was for free, except the slice of Pizza we took to have something in our bellys. 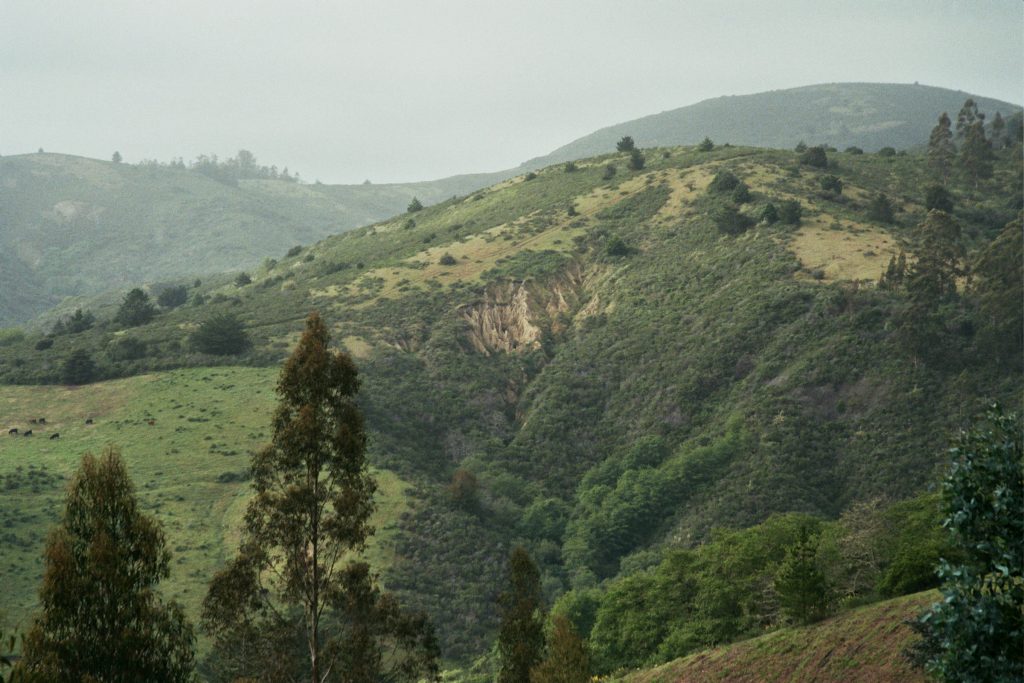 What we found arround the ocean was beautiful, there were dinosaurs, and mountains. I still am fascinated by those hills and their cracks or craters don’t know what that above is called. But in the center it’s like the hill just guttered away. We assumed it’s because everything seems to be out of sand arround here. 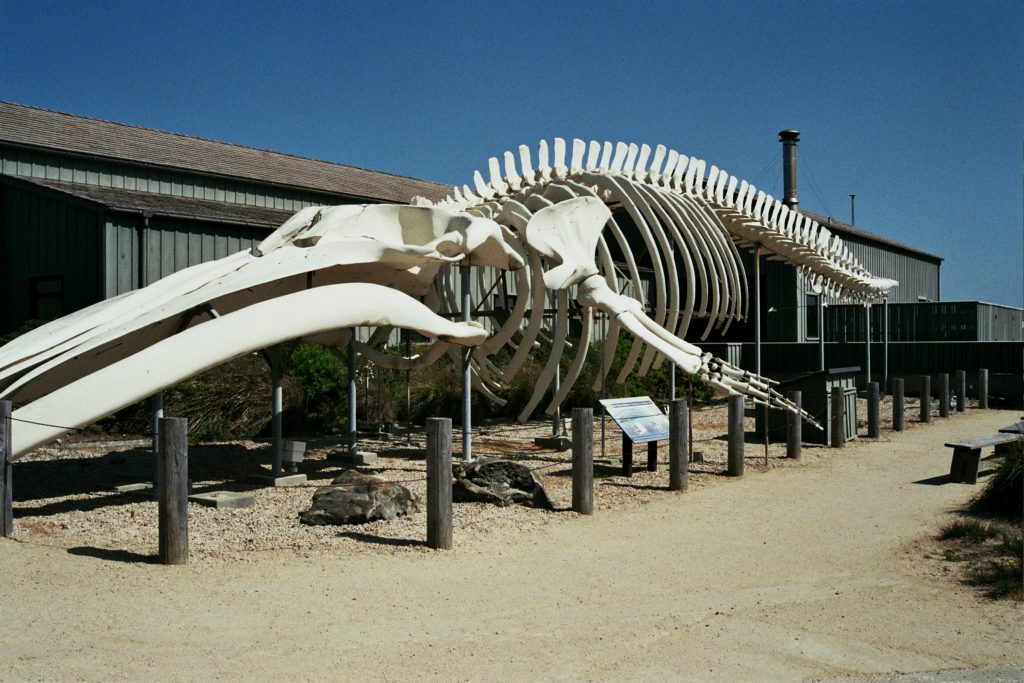 You have to admit it looks a lot like some starange dinosaur, doesn’t it? We thought it was one, when it was some kind of whale! I did not expect that, really not. 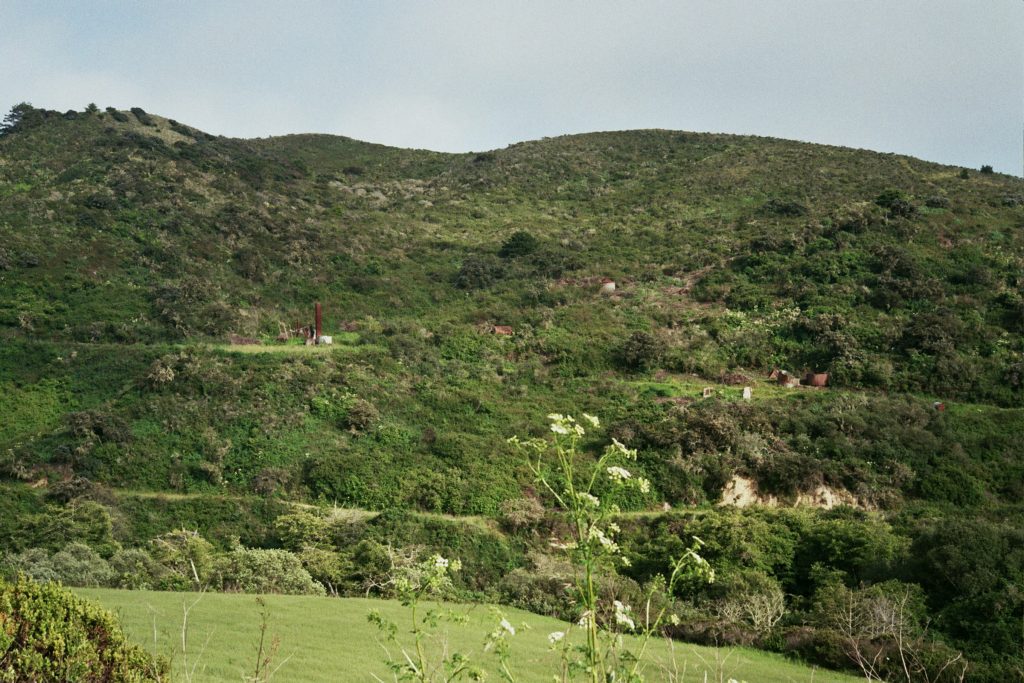 Here we are, that’s some real rural area arround the ocean, when you leave highway 1 towards east and follow any small street you may get stuck at a dead end, but you might as well find some marvellous places, like some rusting iron in the middle of nowhere. 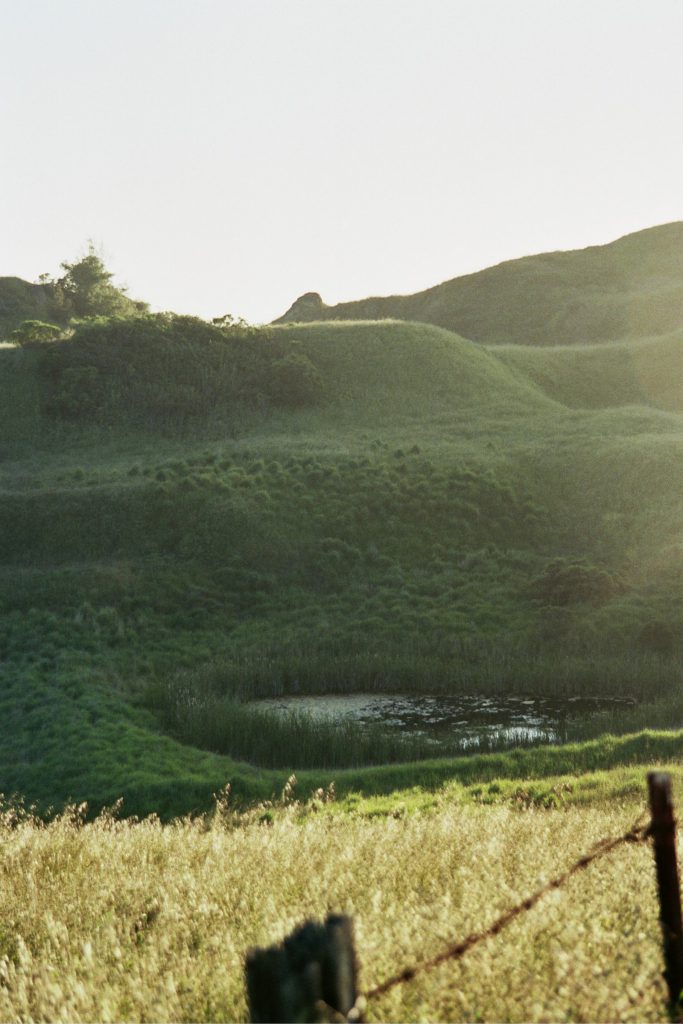 #lakehillsidemaybeInitially we were thinking about go by San Francisco cross the golden gate and fulfill the circle to Fremont so we would have surrounded the bay area. But guess what, it was foggy arround San Francisco so we turned east and took some highway on the hills (92/35/9) and were in something like central europe woods, with some different trees. Real different trees, I’ll take some photos of them another time. On top of the hill we found a small lake and bay area view, pretty cool though we didn’t see too far… 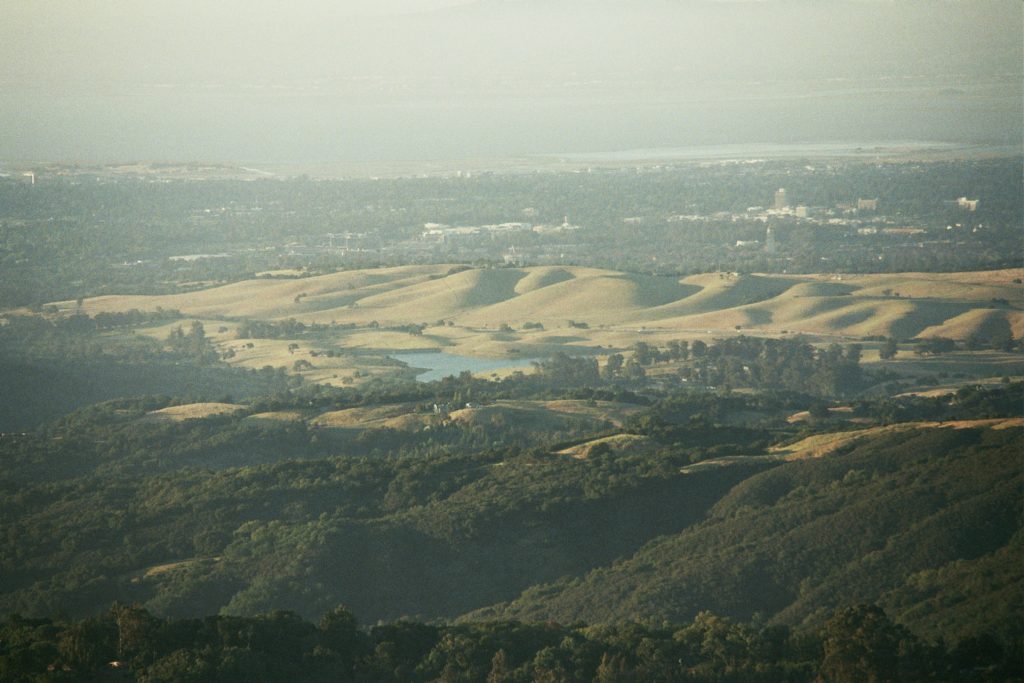 But you can get some kind of an idea what it looked like right? 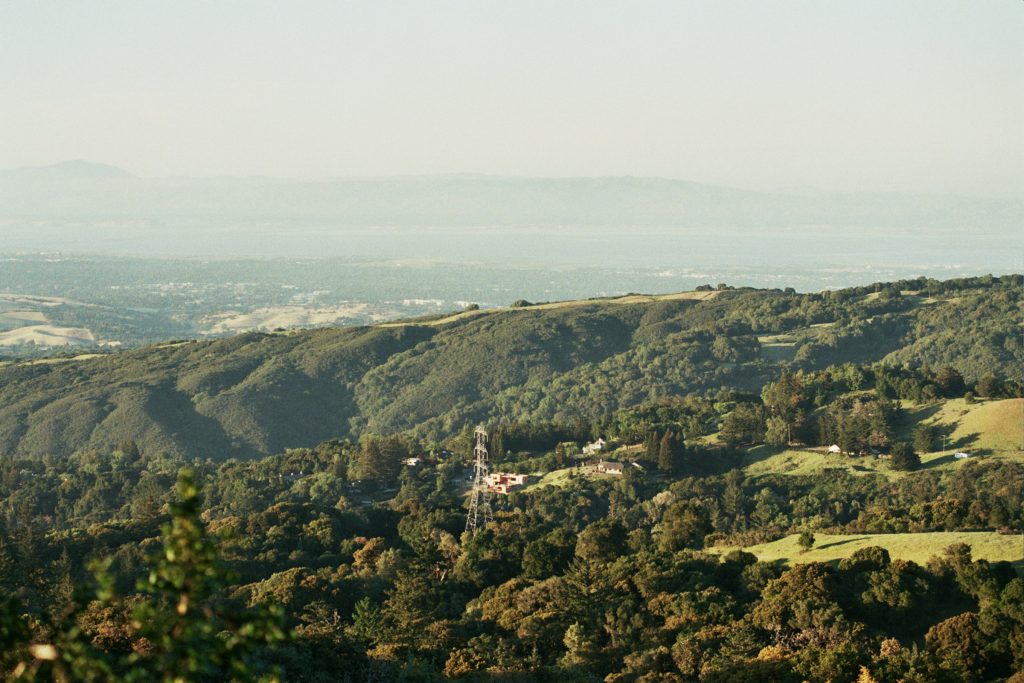 First time I used grandpas Tele on that trip. 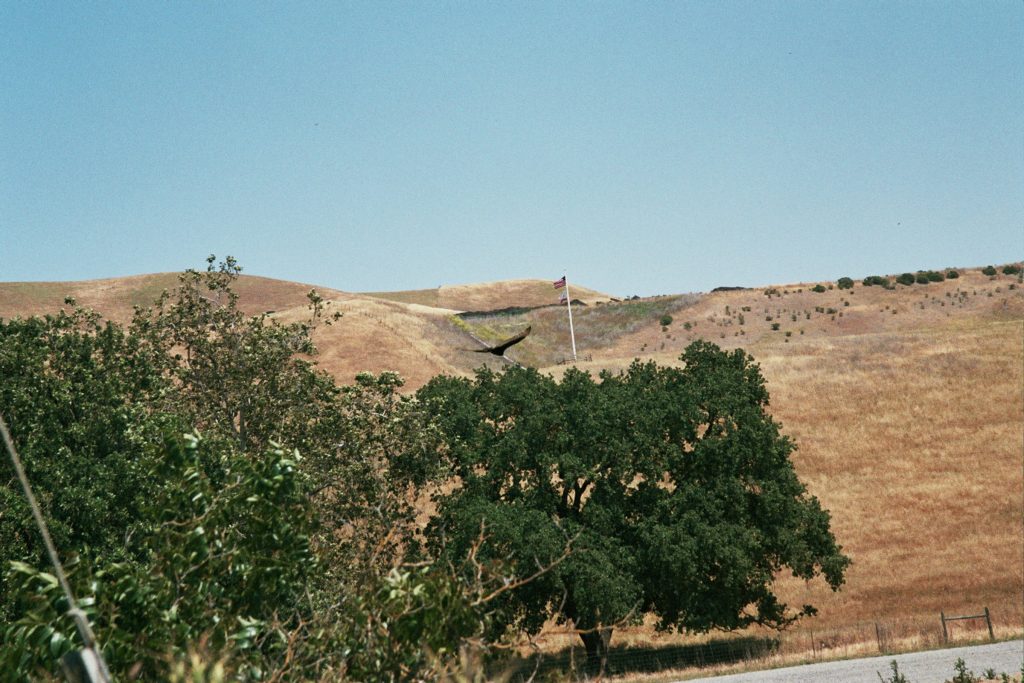 On my way back to Santa Cruz I took myself some more time to stop and take pictures, so I found this place where there were some eagles, I didn’t get a good shot of them… 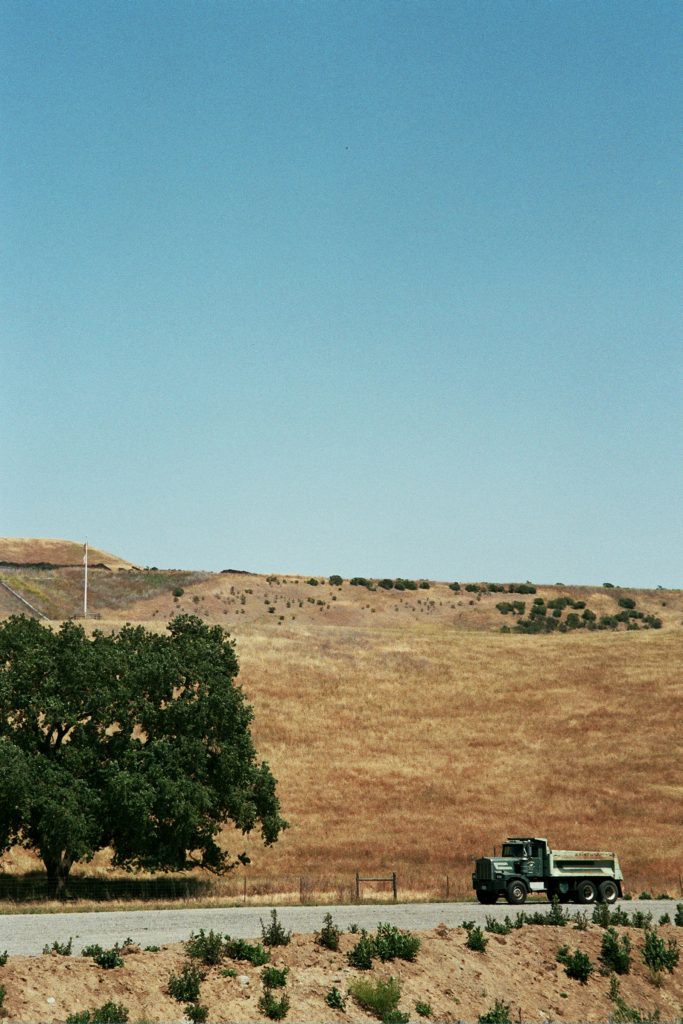 It’s still the same stop, the old truck, the flag, the yellow step, the green tree. Some kind of a good summary what California looks like. And I did not dare to get nearer that truck as there was a sign saying: „Private property“ I still don’t know what’s the deal about that, will you get shot instantly? 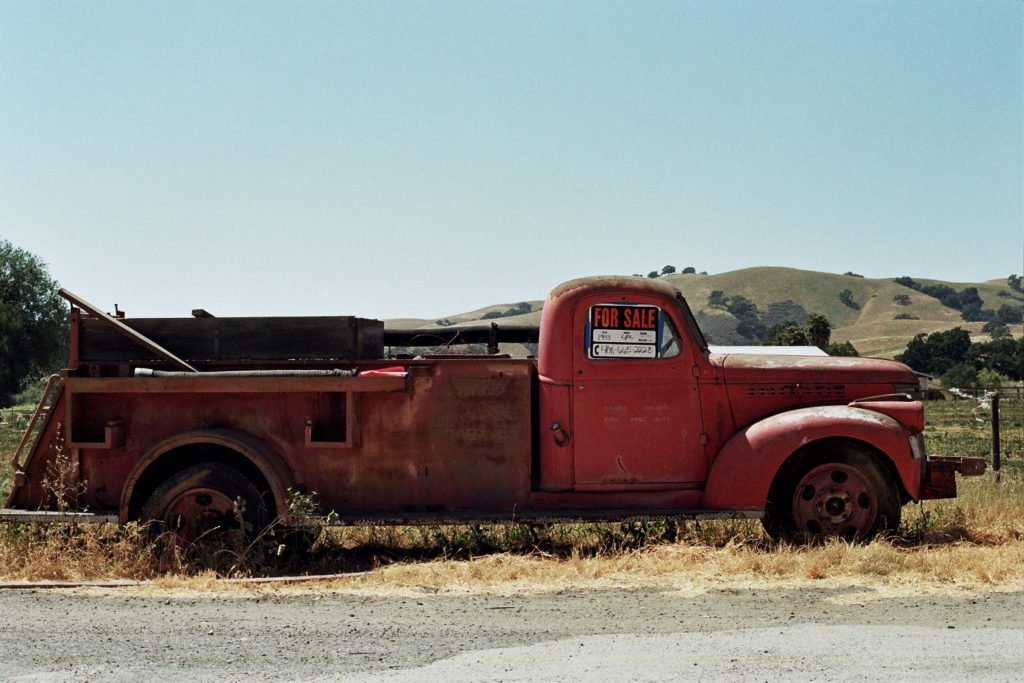 I was about to buy me a new car, as this car looked so good and in shape, I really wanted to have it! 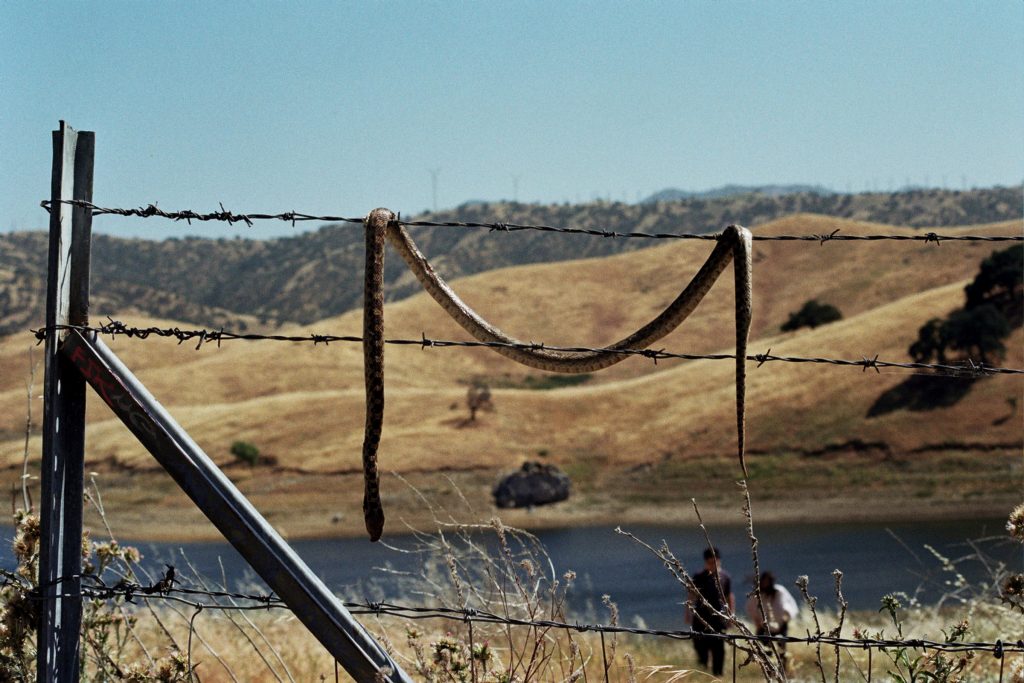 Back home I took the I151 via Pacheo pass. And I couldn’t believe my eyes what I found there, down to the right there was this water, which seemed to be quite big. So I tried to get stopped somewhere, which wasn’t that hard as loads of tourists were arround and there were parking lots next to the highway. One of them tourists pointed out above snake, I woudln’t have seen, as fascinated I was by the water. 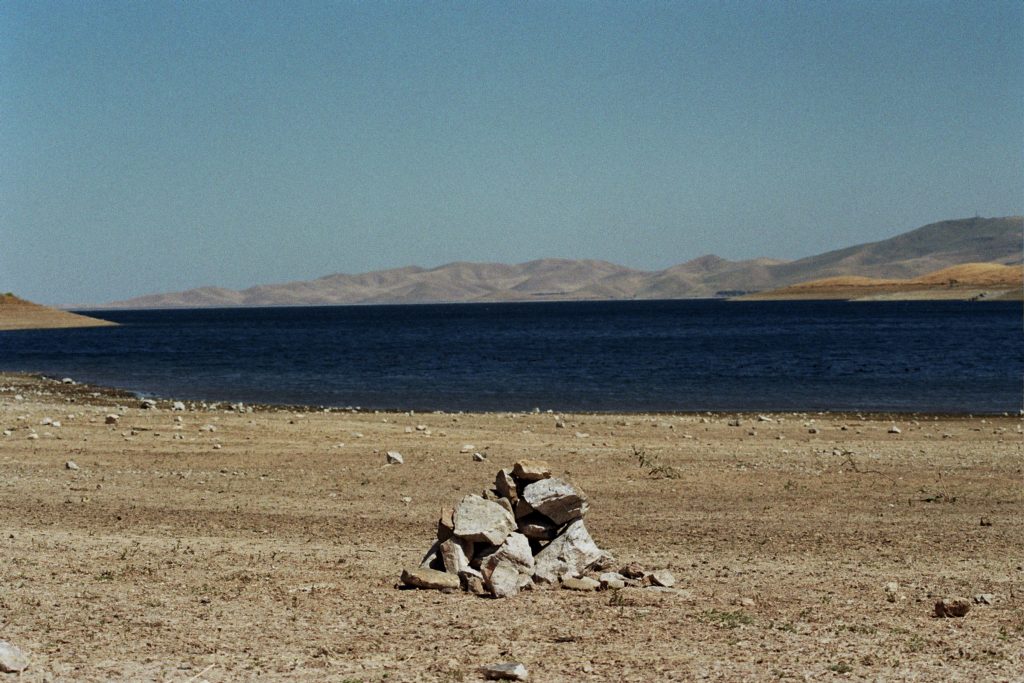 To get a feeling how big San Luis Reservoir is, you can compare it to the Wörtersee, it’s square the sice Wörtersee is long. and the water… it’s got a color deep denim blue. 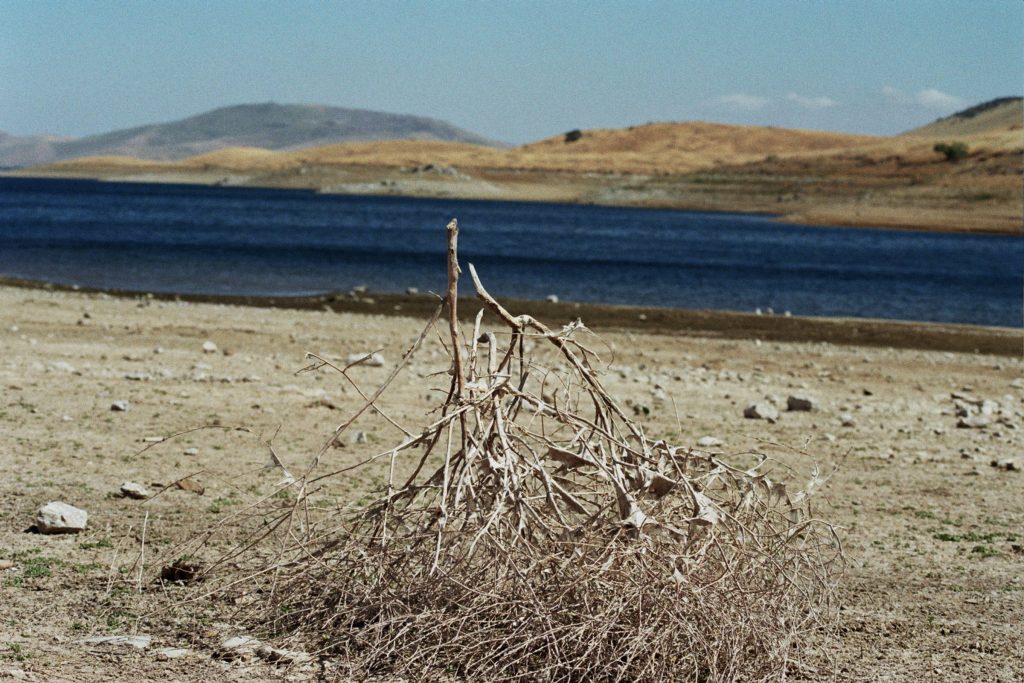 And all arround the water there was like ste, savanna, desert… 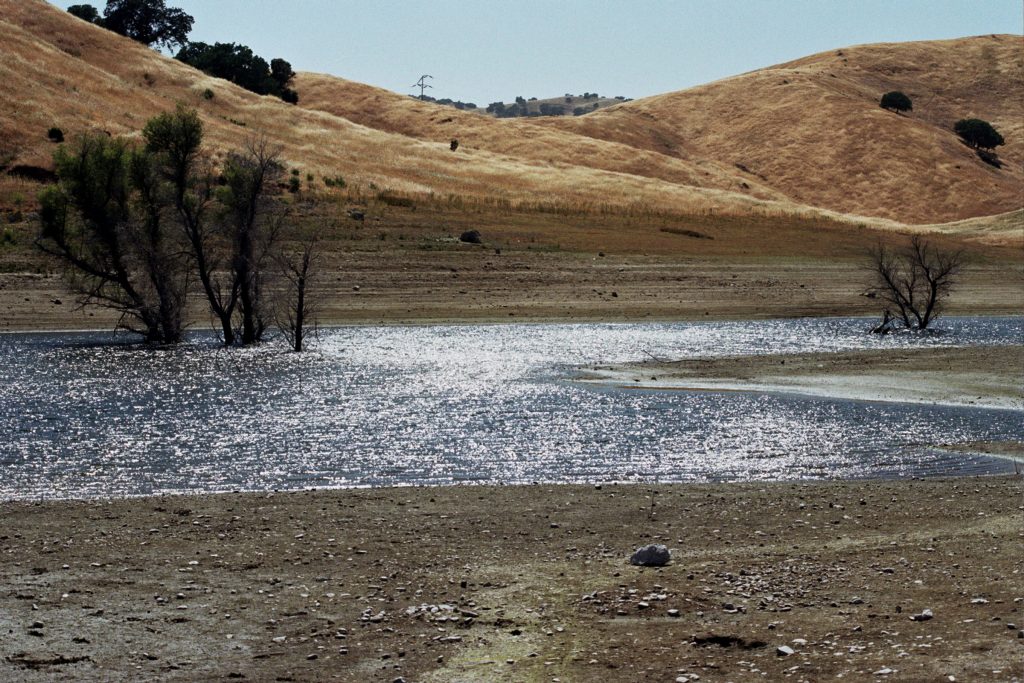 You could see how high the water get’s once in a while, but you could not see what exactly that was on the other side of this „lake“… 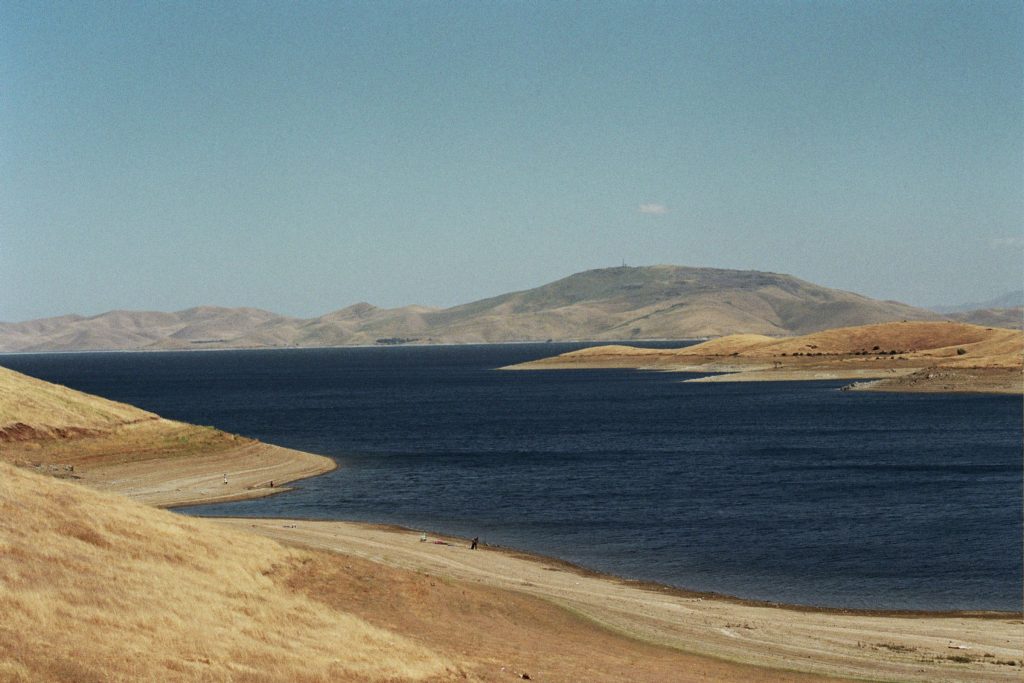